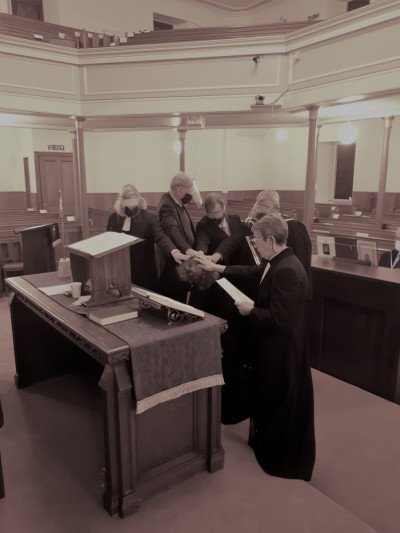 Last evening, the Ordination of Mrs Fiona Anderson as an Ordained Local Minister took place at East Kilbride Old Parish Church. Fiona is one of a trio of OLMs ordained and deployed by the presbytery between September and November: a significant contribution to the Ministry at a time when an increasing number of Full-Time Ministers are approaching retirement.

The Service was held at East Kilbride Old to facilitate live-streaming, and was watched by friends of Fiona’s in the Caribbean, Holland, and the United States of America. Fiona, however, will be working with the Rev. Shaw Paterson and the congregation of Strathaven: Trinity, where she did one of her training placements.

Worship was led by the Rev. Anne Paton, Minister at the Old Parish in East Kilbride where Fiona undertook her probationary period, so she felt very much ‘at home,’ although a member of Hamilton St. John’s.

The Moderator, the Rev. Maxine Buck presided, and gave the charges; and the Rev. Anne Paton preached on the Call of Jeremiah in conjunction with the assurance of Jesus in Matthew chapter 6 that there is no need to worry, because the future is, as it has always been, in God’s hands.

The service can be view at https://www.youtube.com/watch?v=a9x2HoZ5Euk 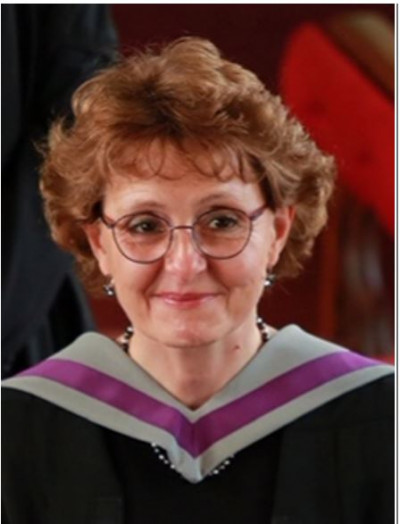 The Presbytery of Hamilton will tomorrow evening, 27 October 2020, Ordain Mrs Fiona Anderson, the second of three Ordained Local Ministers (OLMs) over the course of a few weeks. Fiona has been deployed to work alongside the Rev. Shaw Paterson in the charge of Strathaven: Trinity, a congregation with three places of worship arising from a four-way Union that took place in the summer of 2018.

To allow for live-streaming, the service will take place in East Kilbride: Old Parish Church, courtesy of the Minister and Kirk Session of that place, where Fiona served her probationary period.

The Minister of East Kilbride: Old, the Rev. Anne Paton, will lead worship and preach the sermon, and the Moderator, the Rev. Maxine Buck, will lead for the Ordination and Introduction. The service, which commences at 7pm, can be viewed on https://www.youtube.com/watch?v=a9x2HoZ5Euk 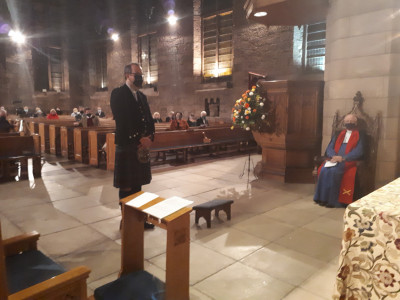 Last evening, the Presbytery of Hamilton met in hunc effectum to Ordain Iain Majcher to the Holy Ministry and Induct him to the pastoral charge of Bothwell. It was a joyful occasion, and the church was filled to its ‘Covid-Capacity’ by Iain’s family and friends and representatives of the Congregation. The Presbytery Moderator, the Rev. Maxine Buck, presided and gave the charges. The Presbytery, however, was delighted to welcome as a guest, Iain’s father, the Rev. Philip Majcher, Minister of Crown Court Church in London, who led opening worship and preached an encouraging and challeinging sermon, reminding everyone present that we all have a ‘ministry’ to give to Christ in exercise of the gifts He has given. The Rev. Iain Majcher is now looking forward to his first service as Minister of Bothwell on Sunday coming, and his wife Celeste and their children hope to be settled in their new home ere long.

The adjacent photograph shows Iain’s father seated to the side of the pulpit, with a kilted Iain standing to give response to the prescribed questions put to him by the Moderator.

The service was recorded and should be available from today on this link https://www.youtube.com/channel/UCE6LZBg1K1ZI68lIHXtHdTw 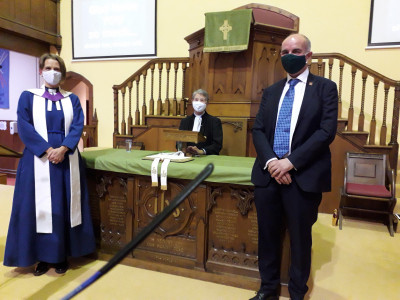 Last evening, Tuesday 13 October 2020, the Presbytery of Hamilton met at Blantyre: Old Parish Church, to Set Apart Bill Henderson (pictured right), an Elder in that congregation, as a Reader of the Church of Scotland. The Moderator, the Rev. Maxine Buck (pictured centre) presided, and the Minister of the Old Parish, the Rev. Sarah Ross (pictured left) preached on the subject of Expecting the Unexpected, (see https://revrebelsarah.blogspot.com/2020/10/expecting-unexpected-preaching-and.html) for an edited version) and addressed some appropriate personal words to Bill at the outset. The Service was attended by five ministers and four Presbytery Elders, as well as by representatives of the Kirk Session of Blantyre: Old and a small group of Bill’s family and friends. It was a joyous occasion, even though attendance was limited due to the present Covid-19 restrictions. The service, however, can be viewed on YouTube via this link https://youtu.be/LzTRiV6lN_w Thanks are due to the hard working team at Blantyre: Old for facilitating both the ‘live’ and ‘online’ services.

This was the first of a series of “four in a row”, but second in a series of five new Ministries, which began with an OLM Ordination on 15 September. Next Tuesday the Presbytery will Ordain and Induct the Rev. Iain Majcher to the Church and Parish of Bothwell. On the 27 October Mrs Fiona Anderson will be Ordained as an OLM at East Kilbride: Old to facilitate live-streaming, but Introduced to work alongside the Minister at Strathaven: Trinity; and likewise on 3 November Ms Lorna Fyfe will be Ordained as an OLM to work in the Coatbridge Area. To facilitate live-streaming this service will take place in the nearby New Wellwynd Church, Airdrie. 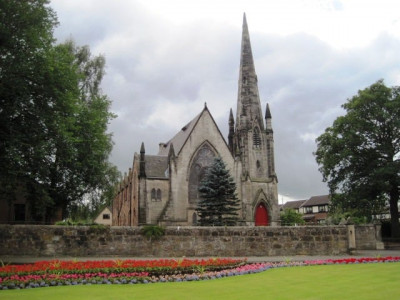 At its meeting on Tuesday 6 October the Presbytery of Hamilton resolved to Set Apart Mr William Henderson to the Readership of the Church of Scotland. The Service will take place on Tuesday coming, 13 October at 7pm within Blantyre: Old Parish Church, Bill’s Home congregation. Due to Covid-19 restrictions attendance is by invitation only, but the Service will be livestreamed via the Facebook page of Blantyre: Old Parish Church, which can be accessed via https://www.facebook.com/BlantyreOldParishChurch/

A short video produced by Gary on the work of the Church and Society programme of Livingstonia Synod.

A snapshot video showing life for the Brough family in Mzuzu, northern Malawi.