At the request of the Lord Lieutenant of Lanarkshire, Lady Susan Haughey CBE, a special Interdenominational Civic Commemoration to mark the ending of World War One will be held within Bothwell Parish Church. The commemoration starts at 5.00pm on Saturday, 10 November 2018 and is open to the public.

The event will be supported by the church Choir led by its organist and director of music, Peter Shepherd. Music will feature Taverner’s: ‘Mother of God, here I stand’; Blatchley’s: ‘For the Fallen’; and Elgar’s: ‘They are at rest’. A wreath will be laid by the Lady Haughey, Her Majesty’s Lord Lieutenant and an Act of Commitment will be held.

Over the past four years, Remembrance has been observed at the church of Lanarkshire men whose lives were sacrificed or injured during the conflict. It is intended that following this year’s Remembrance Weekend, an ongoing display will be created within the church so that those who died or were injured, and their families, will be commemorated into the future.

A special Concert to Mark the Ending of World War One and the Hundredth Anniversary of the Armistice will be held on Remembrance Sunday evening at Bothwell Parish Church.

The Academy of Sacred Music will premiere a new work specially composed for the event.

‘A Soldier’s Requiem’ is set to the war poems of Siegfried Sassoon with sections of the Requiem Mass. The piece will be sung by members of the Academy with string quartet
accompaniment.

Other music will be by Taverner, Parry and Finzi.

In Hamilton the commemorations to mark the Centenary of the Armistice begin on Saturday 3 November at 11.00am at the Top Cross (the top of Quarry Street) with the Garden of Remembrance service.

On the evening of Sunday 4th November the Festival of Remembrance is being held in Hamilton Town House, commencing at 5.00pm. This is an annual event, which is organised by the Hamilton Branch of the Royal British Legion and is supported by South Lanarkshire Council. This year, in a new development, North Lanarkshire Council is also involved. Her Majesty’s Lord Lieutenant for Lanarkshire, Lady Susan Haughey CBE, will represent the Queen, and the Provosts of North and South Lanarkshire will also be present.

On Sunday 11th there will be the usual parade and service at the cenotaph in Bothwell Road, starting at 3.00pm. The commemorations conclude on Monday 12th with a service at 11.00am at the VC Memorial at the Bottom Cross.

Service and Parade 11.00am at the War Memorial in Coatbridge

Service and Parade 3.00pm at the Cenotaph in the Duchess of Hamilton Park, Motherwell

All of these services, which are ecumenical, and are conducted by members of the local clergy, involve young people from the schools, as well as ex-service personnel and members of the Royal British Legion.

Across the Presbytery there will be other Acts of Remembrance and commemorations, on Sunday 11th and on other days, and the support of congregations and members of the public is greatly appreciated.

Finally can I commend to everyone the Poppy Appeal which is vital to the care and well-being of so many of our ex-servicemen and women.

Veterans’
Champion for the Presbytery of Hamilton 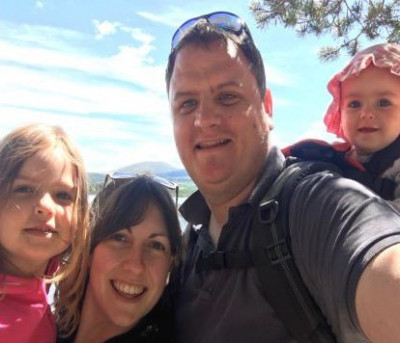 Gary Brough is a new mission partner in Malawi and will travel there with his wife, Jacqueline, and two young daughters later this year.

Gary will be supporting the work of Livingstonia Synod’s Church and Society Programme as Communications and Resource Mobilisation Manager.

Gary is originally from Kirkcudbright where he came to faith in Jesus as part of the congregation of Kirkcudbright Parish Church. A visiting Church of Scotland summer mission (impact) team played a significant role in that with Gary joining teams in Kirkcudbright, Blairgowrie, Auchterarder and Fort Augustus in the years that followed.

Gary moved to Glasgow to attend Strathclyde University. Being part of the CU there saw Gary’s faith continue to mature. It’s also where he met his wife, Jacqueline, originally from Dunblane.

After a number of years there, attending The Christian Centre, Apostolic church, they moved to Lenzie. They have been members at Kirkintilloch Baptist Church for the last 6 years where Gary is an Elder overseeing the world mission committee and Jacqueline is involved in the worship team where she plays piano.

Around the same time Gary started working at EMMS International as Communications manager - a Christian International healthcare charity working in Malawi, Nepal, India and Zambia. Spending time travelling to visit partners in these countries - including in Livingstonia Synod.

Jacqueline will leave her role as a pensions consultant and together with Gary and their daughters Eilidh (5) and Morven (1), the family are excited about this next stage in God’s plan for them.