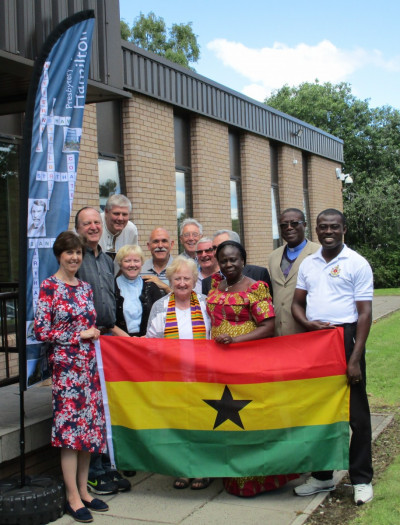 Our visitors from Kwahu Presbytery, George and Theresa Acheapong and Charles Oppong, were today welcomed to Presbytery Office. After a light lunch some committee conveners spoke about how their committees function. 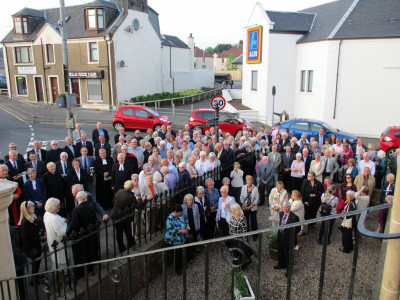 On Thursday 31 May 2018, the Presbytery of Hamilton met at the East Parish Church, Strathaven, to effect the Union of the four Congregations of Chapelton, Glasford, Strathaven: East and Strathaven: Rankin. The United congregation shall henceforth be known as Strathaven: Trinity, and will be led by the Rev. Shaw James Paterson, a former Presbytery Clerk, and the incumbent of Chapelton linked with Strathaven: Rankin. The united congregation will retain three places of worship, the two village churches of Chapelton and Glasford being used alongside the former Rankin building, in Lethame Road.. The latter will serve as the principal place of worship and the hub for the activities of the united congregation. The Rev. James M. Gibson of Bothwell Parish Church preached a sensitive, encouraging and challenging sermon, acknowledging the mixed feelings of joy in going forwards, and the grief felt by some members of the congregation over a place of worship that holds so many memories for them. The Moderator, Mrs Roberta Hutton, led the act of uniting the congregation and introduced the Rev. Shaw Paterson as minister of the united charge. She then led the Presbytery and congregation in the formal act of drawing the era of public worship in the East building to a close. The Clerk read a brief narrative of the story of the East Church, from its formation as a Relief Church in 1777 through to the present day, after which the Moderator offered thanks in prayer. As the congregation sang “Now thank we all our God” as a recessional hymn, the pulpit bible, baptismal bowl, communion plate, and offering platter, were carried from the Church by some of the Elders. The Presbytery and the congregation followed the Moderator out of the building for the last time, and at the foot of the steps all gathered around and exchanged “the Grace” before the Moderator pronounced the benediction. This act brought an era in the life of the Church in Strathaven to an emotional but meaningful end, whilst heralding a hope filled future. [The adjacent photograph shows the external gathering take from the elevated position of the main door of the Church.