The Presbytery of Hamilton met last evening, to induct the Rev. Lorna MacDougall to the charge of Overtown. A rather wet miserable evening did not deter an excellent turnout, and sixteen visitors from the Presbyteries of Falkirk, Glasgow, Lanark and Stirling augmented the twenty-four members of Presbytery present. The occasion was again a joyous one, with the Moderator adding his usual light touch to the formal parts of the proceedings, and with an excellent sermon delivered by the Rev. Terry Taylor, who was herself inducted to a charge in the Presbytery three months ago. Pictured in the above photograph are Lorna, with the Rev. Neil Buchanan, Interim Moderator on the outer left, and her sister, Maudeen MacDougall, minister at Carnwath lw Carstairs, on the outer right. She is flanked by the Rev. Terry Taylor, and the Moderator of Presbytery, the Rev. Gavin W.G. Black. 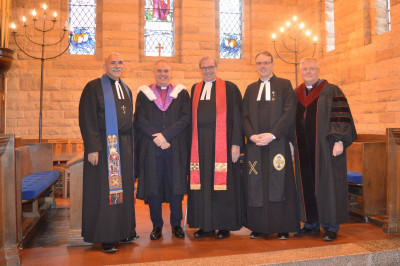 The second of three inductions to charges within Hamilton Presbytery took place on Monday night, 26 June 2017, when the Rev. Bryce Calder, who has translated from Kirkintilloch: St David’s Memorial, was inducted to the Pastoral Charge of Motherwell St. Mary’s. Pictured left is the Rev. Bryce Calder (second left) accompanied by (left to right) the Rev. Gavin W G Black, Moderator of the Presbytery; the Rev. Arthur Barrie, Interim Moderator; the Rev. Christopher Rankine (Hamilton: Hillhouse) who led worship and preached the sermon; and the Presbytery Clerk, the Rev. Dr. Gordon A McCracken.

The Presbytery will also on Thursday evening, induct to the Pastoral Charge of Overtown the Rev. Lorna I MacDougall, who has successfully transited from the Auxiliary Ministry, having served in that capacity for a good number of years within Falkirk Presbytery.

Earlier this month, the Presbytery associated with the National Synod of Scotland of the United Reformed Church for the ordination of the Rev. Stewart Cutler, who was inducted to the Pastoral Charge of Stonehouse: St Ninian’s LEP by both denominations, the joyous service being a clear demonstration of a closer working relationship between two branches of the one family. The service took place on Friday 9 June 2017.