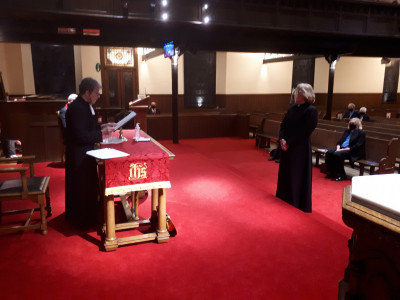 ​At Airdrie: The New Wellwynd Parish Church, on Tuesday 15 September 2020, the Presbytery met for the Ordination of Mrs Beverley Stevenson, the first of a trio of Ordained Local Ministers who have qualified over the summer and who take up their roles this autumn. This was the first Ordination to take place under the Covid-19 restrictions, and on the whole the service went well, the limited number of physical participants being joined online by many others.

The Rev. Robert A Hamilton, minister at The New Wellwynd led worship, and the Ordination was presided over by the Moderator of the Presbytery, the Rev. Maxine Buck; both of whom addressed appropriate words to the ordinand and congregation, which included representatives of two congregations in Motherwell. The Rev. Beverley Stevenson has been deployed to work with two Motherwell congregations, Crosshill and St Margaret’s, and the two Session Clerks and representative Elders were present in person to welcome Beverley on behalf of the wider membership, and to offer their support and encouragement to her as she formally takes up her post. 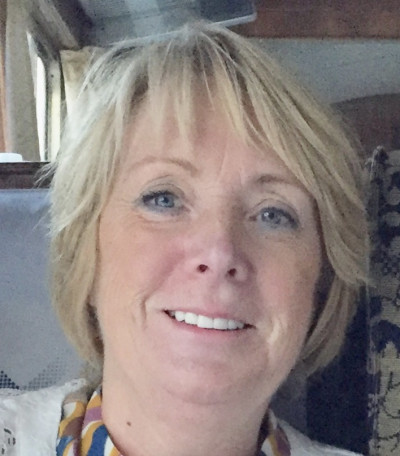 Mrs Beverley Stevenson is the first of three Ordained Local Ministers who the Presbytery of Hamilton look forward to Ordaining in the next couple of months. She has been deployed to work in the charge of Motherwell: Crosshill linked with Motherwell: St Margaret’s.

Her service of Ordination, the first under Covid-19 conditions, will take place on Tuesday 15 September 2020 at 7pm at Airdrie: The New Wellwynd Parish Church, which has the facility to live-stream the service, allowing participation by the Congregations as well as a larger body of the Presbytery.

Due to restrictions a limited number of persons, including Beverley’s family and representatives of the Congregations to which she is being deployed, will be in attendance in person, and only five designated Presbyters - three Ministers and two Elders - will participate in the “laying on of hands,” suitably masked and vizored.

The Ordination will be led by the Moderator of the Presbytery, an Auxiliary Minister, the Rev. Maxine Buck, and the Preacher for the occasion will be the Rev. Robert A Hamilton, Minister of The New Wellwynd.

The Service of Ordination and Introduction can be viewed via: