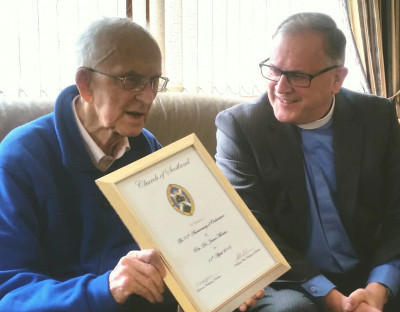 On Monday 11th April 2016, a well-known Minister of the Church of Scotland, the Rev. Dr. James Martin, attained the 70th Anniversary of his Ordination as a Minister.

Dr. Martin is a Motherwell man, raised in Crosshill Street, baptised in Manse Road Church, and schooled at Dalziel primary and high schools, before going to study at Glasgow University; which institution later awarded him the honorary degree of Doctor of Divinity in 1983. He returned to his Motherwell roots upon retirement at the end of 1987, and actively ministered in retirement to a number of congregations over the course of the ensuing decade. He also served for many years as Chaplain to Motherwell Football Club and still has a love for the Club, although now in his 96th year his visits to Fir Park are few.

Licensed by the Presbytery of Hamilton on 3rd April 1945, he was ordained to Ministry just over a year later on 11th April 1946 by the Presbytery of Irvine and Kilmarnock, where he served as Minister at Newmilns West from 1946 until 1954, when he was translated to High Carntyne Church in Glasgow, which he served as Minister from that time until retirement.

Dr Martin was a prolific writer. He has had thirty books published, his last being a selection from a series of articles which had been published in the Church’s magazine Life and Work under the title “Seen from My Manse Window.” He was also a regular contributor to the BBC’s Sunday Service Programme.

To mark this special anniversary, the Moderator of the Presbytery of Hamilton, the Rev. F. Derek Gunn of Clarkston Parish Church, Airdrie paid Dr. Martin a visit, accompanied by the Presbytery Clerk, the Rev. Dr. Gordon A McCracken, and the Rev. Alan Gibson, Minister of Motherwell South Parish Church. Dr. Martin was presented with a Certificate, and a celebratory cake marking the special anniversary, kindly gifted by a member of the Moderator’s congregation. 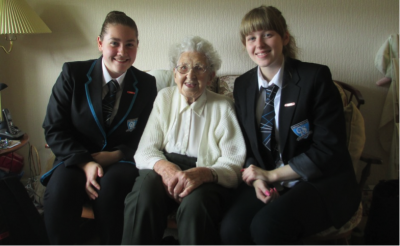 A dedicated member of Claremont Parish Church, East Kilbride, along with her team of young volunteers, has been recognised for her role as the ‘lynchpin’ in an elderly befriending scheme which has also been praised in both the Scottish and Westminster parliaments.

Mrs Avril Anderson, 74, a community councillor and congregational board member, began the Calderglen Befriending Project over four years ago after noticing a need in the community and forming a partnership with Odette Frazer, depute head teacher of Calderglen High School.

Mrs Anderson, Ms Frazer and the students were presented with certificates recognising the success of their work at the Generations Working Together Recognition Awards ceremony at Strathclyde University. Last year, at the same awards, Mrs Anderson was named Volunteer of the Year.

Each year new 6th year students from the school are paired with elderly community members, around 80% of them from the Claremont Parish Church congregation. The befrienders call in for one hour each week to help out around the house or just to chat.

After viewing the scheme’s success, MSP Linda Fabiani and MP Lisa Cameron have both urged other schools to create similar befriending projects.

Mrs Anderson is keen to challenge how older generations view young people saying: “I enjoy seeing young people getting the praise they should as there’s so much bad press on today’s youth when we have such good kids in our Community who wish to do good”.

Mrs Anne Robb, 76, who has participated in the project and is currently housebound due to ill health says: “I welcome the fact the befrienders come in and see me. It’s lovely to have them come over and the do a few errands. I really just enjoy having a blether with them”.

She is keen to stress the importance of the church as a way to bind communities together, saying, “My church has been important to me all my days”. Mrs Anderson added: “It’s all thanks to the church that this has taken off. If the old people hadn’t accepted it then this wouldn’t have taken off.”

Many students now help out at a food bank every Monday that is partly run by Claremont Parish Church, and at Café Clare, a weekly event which sees high schoolers prepare, serve and clear food. They also sit at each table to talk to the elderly visitors who use the café.

“Our young people are receiving so much out of it. It’s getting them to learn the importance of values such as care and respect. At least three or four times students have attended the funerals of people they are partnered with. It shows the lasting impact and legacy of the project”.

[Photograph shows Joan Taylor, 94, the oldest person in the befriending scheme, with two of her young friends from Calderglen High School]